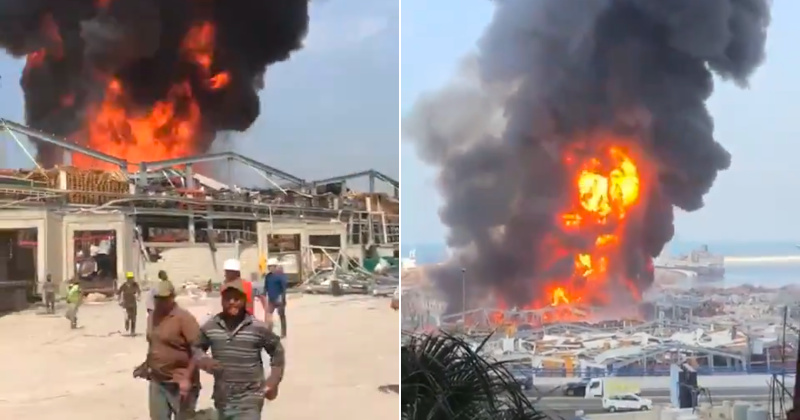 Over a month after the Aug. 4 ammonium nitrate blast which leveled whole parts of the Lebanese capital, killing at least 190 people and wounding over 6,000, Beirut is panicking once again as another huge fire engulfs the port on Thursday.

A new “massive is fire raging” Al Jazeera is describing. “There was no immediate information about what caused Thursday’s fire, which sent a large column of black smoke into the sky.”

“The Lebanese army said the blaze was at a warehouse where oil and tires are placed in the port’s duty free zone,” Al Jazeera continues.

Unlike a much smaller blaze which broke out Tuesday, reportedly after a controlled burn of a debris and trash heap accidentally spread, this one is large enough to be seen for miles.

A black smoke plume could be seen towering over the city, again eerily reminiscent of the Aug. 4 disaster.

Military helicopters could be seen attempting to put out the fire, also as residents could be heard shouting from buildings, warning their neighbors about the new fire, according to local reports.

The cause is as yet unknown and regional reports are at this point offering few details.

Washington Post reporter Liz Sly says the blaze is so large that it’s turning the sky black again over Beirut, in reference to the original disaster over the city of over a month ago.

Anger was already boiling over as recent weeks have seen mass street protests at government negligence and corruption centered in the port, leading to the resignation of the prime minister and other top national government officials.

But this latest disaster in the making is sure to lead to breaking point, as some Lebanese on social media as well as regional journalists are already assuring.

A new report shows that a recent outbreak of polio in Sudan was the result of a vaccine designed to treat polio. This is a damning disclosure and shows the UN and it’s health wing, the WHO, can’t be trusted when it comes to vaccines and their safety.